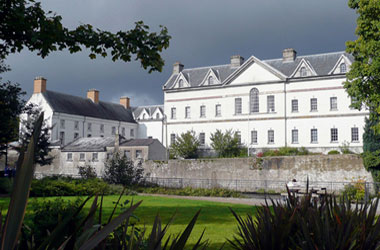 King House is a magnificently restored Georgian Mansion located in Boyle, County Roscommon. It was built in the early 1700′s for Sir Henry King, whose family were one of the most powerful and wealthy in Ireland.

After its first life as a home, King House was converted into a military barracks in the 19th century for the famous Connaught Rangers regiment. At the end of Civil War in 1923 the barracks passed into the control of the newly formed Irish Free State Army.

Following many years as a merchant’s store, King House was saved from demolition in the late 1980s and restored to its former Georgian style by Roscommon County Council.

Marvel at the grandeur, savour the magnificence of the period rooms, or just have fun exploring our interpretive exhibitions designed for both adults and children alike!

Children Playing
Writing with a quill and ink or building a brick vault are just some of the many things to do, and a tour of King House would not be complete without a visit to the cold and forbidding jail cells!