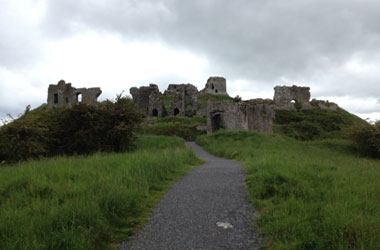 The castle at Rindoon, located beside Lough Ree, has been described as “one of the most Important complexes of medieval monuments in Ireland” ~ John Bradley. Before the development of modern transport systems, goods and people were brought more easily by water than overland. The Shannon river was the most important north/south waterway navigated by the Vikings.

It had to be crossed by those moving from east to west. Because Rindoon is situated on a peninsula on the west shore of Lough Ree about half way between Lanesboro and Athlone and at a point where the distance from the opposite east shore is quite narrow, it became a place of great strategic importance in the 13th and 14th centuries. Whoever controlled Rindoon controlled Lough Ree and with it the boat traffic up, down and across the river. The site therefore attracted military, civilian, and monastic settlements.