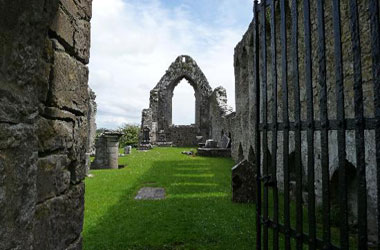 More than 750 years ago, Felim O Conor, King of Connacht, established the Abbey of Roscommon, found on the outskirts of the old town of the same name. The Roscommon ruin has many highlights, including an effigy of a king dressed in a long robe and mantle. It is thought to be O Conor, who was buried on the grounds, or possibly one of his successors. Though the structure is usually referred to as an abbey, it’s more accurately described as a friary, as it was created for the Dominicans. It faced many difficult times during its history, including a fire in 1270 and lightning strike in 1308.