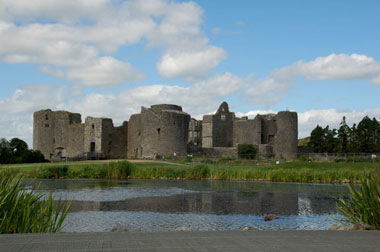 To the north of Roscommon town sits this Norman Castle, built in 1269. The Irish forces destroyed it in 1273, and rebuilt it shortly afterwards.Built and originally occupied by Robert de Ufford, Lord Justice of Ireland, the castle was passed on to families of the surnames O’Conor and O’Kelly before Cromwellian forces took it in 1652.The remains of Roscommon Castle today include an entrance gate flanked by two large towers. It has rounded corners, bastions, and a series of mullioned windows. Occupant Sir Nicholas Malby, who also altered and renovated the original castle building, added other buildings located on the grounds after 1578.