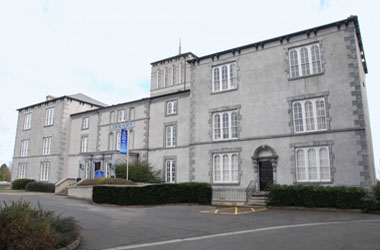 One of the most modern Library Headquarters and Branch Libraries in the country, it is housed in the building known as the Old Infirmary. This impressive building was built in 1783 from an endowment from Mrs. Laetitia Walcott, a woman of considerable substance. The original building was of limestone, three storied over a basement, with slated roof and plain limestone dressings around the windows. The two symmetrical pavilions on the North and South ends of the central portion were constructed after 1832.

The South Pavilion incorporated the physician’s residence with an entrance to the front of the building, with carved door case and steps. Other renovations were carried out to the building in 1902 and 1929. It continued to be used as a hospital until 1941, when the new county hospital was built. This is a beautiful building, well worth a visit particularly if you are interested in researching your Roscommon roots. The Library houses a wealth of archival material.