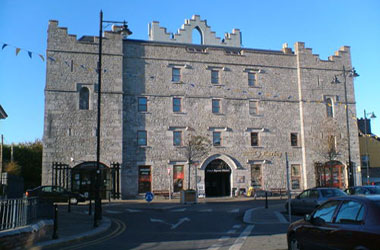 Roscommon Jail is the massive building of solid stone, once the county jail. It had the distinction of having a hangwoman in the person of “Lady Betty”, a criminal who had her sentence for murder withdrawn on condition that she carried out the hangman’s task, without fee or reward. According to local records, the jail was built in the early 1740s and was owned by the Roscommon landlord, the Earl of Essex. The building served as a jail for less than a century. It subsequently became a lunatic asylum, then a refuge for smallpox sufferers and later a private house. The Jail has been totally rebuilt, although the front facade has been retained, and now houses an arcade of shops and restaurant on the ground floor with living apartments on the upper floors.