1960 was an important year for the Roscommon Branch of the Catholic Young Men’s Society (C.Y.M.S.) as it was the Silver Jubilee of their foundation. The members used to meet in the Harrison Hall (now the Bank of Ireland) and Benny Mulhern, one of the members of the C.Y.M.S. , recalls that meeting was convened to identify an appropriate way of marking the Jubilee. The branch had an ac-tive dramatic society which included women and Vinnie Mahon proposed that the founding of a Drama Festival would be in keeping with the aims of the C.Y.M.S. to promote Irish culture and would provide a fitting climax to twenty five years of eventful history. A committee was formed and mem-bers pledged £10 each to finance the project. The following page from the first Roscommon Drama Festival Programme gives the membership of the committee:

Great credit must go to that first committee because they attracted well established drama groups from right across the country with a variety of high quality plays. The full line up was as follows:

Tuam Theatre Guild with The King of Friday’s Men by M.J. Molloy

Newport Dramatic Society with The Whiteheaded Boy by Lennox Robinson

Charlestown Dramatic Society with The Country Boy by John Murphy

Dundalk Dramatic Society with An Inspector Calls by J.B. Priestly

Just as impressive was the calibre of adjudicator as outlined in his profile in the festival programme. 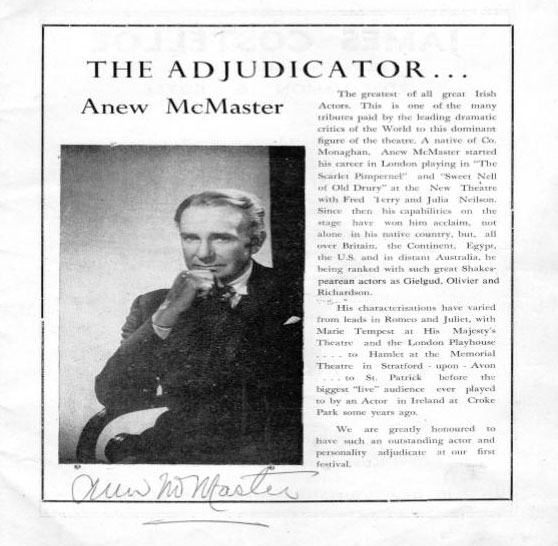 Then as now voluntary community groups relied on the local community and businesses for support and the following page from the first programme indicated that the support was forthcoming. 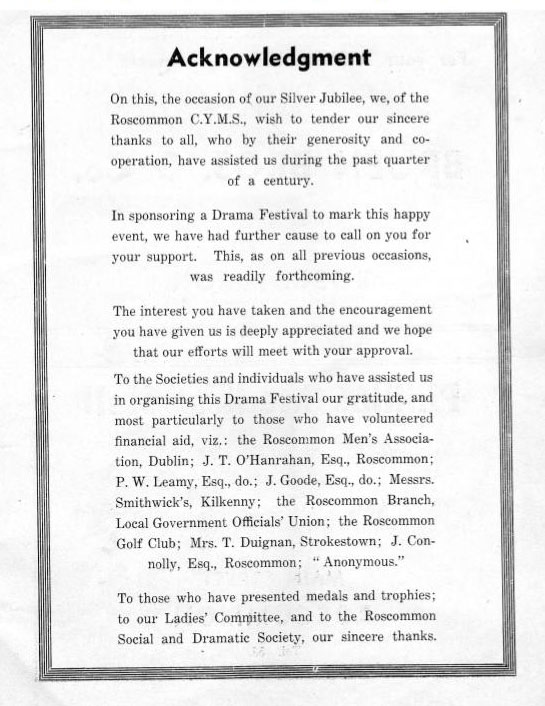 The festival was hosted in The Royal Cinema which had seating for six hundred patrons. Tony Robin-son, who managed the booking at that time, recalls additional seats having to be placed along the

aisles to accommodate the patrons who were not able to get a seat. There was no regard for health and safety in those days Tony remarked. Tony also recalled the hard bargain which the Festival Com-mittee had to drive with the proprietor of The Royal Cinema Johnny Raftery. As hosting a festival was a new venture for the committee it was a priority that they would not be out of pocket so for the first two years the agreement was that they would be guaranteed €300 from the proceeds with the balance going to the proprietor. As the festival was established the committee was in a position to seek better terms and Tony Robinson recalls robust bargaining between Vinny Mahon and Johnny Raftery. With full houses and even a matinee on Sundays the festival generated a lot of revenue for the committee and for the local community.

The Royal was sold in 1980 and with no suitable alterntive venue available the Festival ceased until it was revived in 2007 in our beautiful Roscommon Arts Centre.